J. Habermas: Why Angela Merkel is wrong on Greece 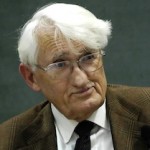 25 juni 2015 – The German sociologist and philopher Jürgen Habermas criticizes “the constipated manner in which the German government perceives its leadership role in Europe.” According to Habermas “It’s the citizens, not the banks, which must retain the final say in existential questions for Europe.”

First published in German in Süddeutsche Zeitung. Read the whole article at: Socialeurope.eu