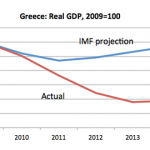 25 juni 2015 – In the New York Times Opinion Column, Paul Krugman, the Nobel Prize-winning Op-Ed columnist points out, that “the people who utterly failed to see the damage austerity would do — see the chart, which compares the projections in the 2010 standby agreement with reality — are now lecturing others on growth? Furthermore, the growth concerns are all supply-side, in an economy surely operating at least 20 percent below capacity.
Talk to IMF people and they will go on about the impossibility of dealing with Syriza, their annoyance at the grandstanding, and so on. But we’re not in high school here. And right now it’s the creditors, much more than the Greeks, who keep moving the goalposts. So what is happening? Is the goal to break Syriza? Is it to force Greece into a presumably disastrous default, to encourage the others?”
He concludes that “At this point it’s time to stop talking about “Graccident”; if Grexit happens it will be because the creditors, or at least the IMF, wanted it to happen.”