Home Artikelen T. Mayer: The Euro as a Foreign Currency for Greece

T. Mayer: The Euro as a Foreign Currency for Greece 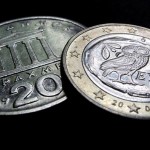 19 juni 2015 – Thomas Mayer, former Chief Economist of Deutsche Bank, proposed three years ago that introducing  a parallel currency in Greece could be a solution to meeting the government’s financial obligations within Greece. Mayer was the creator of the ‘geuro scenario’. In this contribution to the `Centre for European Policy Studies` (CEPS), in contrast to his contribution just a month ago (also published by CEPS which examined how a Greek parallel currency to the euro could allow the Greek government to gain some room for manoeuver in fiscal policy while at the same time continuing the adjustment programme demanded by the country’s creditors, Thomas Mayer explores the question of how the Greek population could still retain the Euro after a default by its government. Contrary to general belief, he finds that Grexit and the reintroduction of the Euro as a foreign currency would probably be positive for the Greek economy, although its creditors would be hard hit. It is therefore primarily in their interest that defaulting and Grexit are avoided.