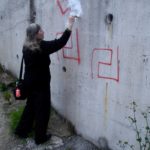 About the roundtable series:
Under the general title “Modern Greek Studies and Beyond: Local Cases, Global Debates,” the roundtable discussions will bring local case studies from Greek culture, society, history, and politics to bear on larger and timely theoretical, political, and cultural debates: debates on ecocriticism, fascism and populism, biopolitics and race, the relevance of contemporary (Greek) art, languages of futurity from the European and Global South, and Covid-19 as a transversal crisis.
By inviting speakers situated (mainly or partly) in Modern Greek studies alongside speakers working in other fields, we will explore how cases from modern and contemporary Greek culture, politics, and history can be relevant for scholars whose work is not (only) situated in Modern Greek Studies, and ask how Modern Greek studies could be repositioned through an engagement with such global debates.
We aim at inclusivity and diversity in speakers and audiences and at stimulating interdisciplinary dialogues that will take scholars outside the comfort zones of their disciplines. In each roundtable, invited speakers from different disciplines and career stages will converse with each other, in order to promote exchanges among scholars who might normally not sit around the same academic table.

About the network:
“Rethinking Modern Greek Studies in the 21st century: A Cultural Analysis Network” emerged from a partnership between the departments of Modern Greek at Oxford and Amsterdam but brings together scholars in several universities around the world and aims to progressively widen its reach to include more partners and countries.
Our inaugural conference in Oxford (January 31- February 1, 2020) was the first meeting place for the formation of a dynamic network of scholars that has been growing ever since (a series of blogposts reflecting on the first meeting of the network are available here). Given the current restrictions that do not allow us to host face-to-face events, we will continue the network’s activities this academic year with this online roundtable series and – if the situation allows it – a 2-day conference in Amsterdam in the spring of 2021. The series will include five to six roundtables spread throughout the current academic year.

This event will be held online as a Zoom webinar. The event is free and open to all but registration is required.

You can watch this roundtable in the link: https://www.youtube.com/watch?v=j3rbih51BEo