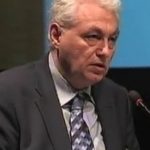 Bio speaker: Prof. dr. I. Kazazis, studied Classical Philology at Aristotle University of Thessaloniki, and at the University of Illinois and Yale. He is fellow at Harvard’s Center for Hellenic Studies, the Austrian Academy of Sciences, and the University of North Dakota (Lexicography fellow). Since 1979, he is professor of Classical Philology, AUTh, and in parallel: president, School of Modern Greek (AUTh); research coordinator, Center for the Historical Lexicon of Modern Greek (Academy of Athens); director for Minor Languages, Atlas Linguarum Europae. Since 1994, Deputy Director and Director of the Centre for the Greek Language and Director of the Centre’s Divisions on Lexicography and Certification of Proficiency in Modern Greek. Since 2010, Director of the Greek National Council for Primary and Secondary Education. Extensive research in Classical Philology (for example on Lyric Poetry, Historiography, History of Greek Studies in Europe from the Renaissance to the present), Medieval and Modern Greek Lexicography (for example six volumes of the Kriaras Medieval Greek Dictionary.