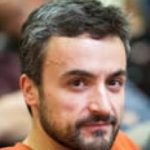 Varialezing: Lecture of the Dept. of Modern Greek Studies, UvA (in cooperation with the NGNS and the Marilena Laskaridis Chair of Modern Greek Studies, UvA)
Title: How to do a cinema of biopolitics: Notes on the “Greek Weird Wave”
Guest-speaker: Dr. Dimitris Papanikolaou, Associate Professor of Modern Greek, University of Oxford, Fellow of St. Cross College.
Place: Universiteit van Amsterdam, Spuistraat 134, Amsterdam, room 1.05
Time: 3.30 p.m.
Abstract
With the international success of the films of Yorgos Lanthimos and other members of his generation of filmmakers, Greek cinema has re-entered the international market and the conceptual map of World Cinema. In this lecture Dimitris Papanikolaou goes back to those recent Greek films that have been collectively described as the “Greek Weird Wave”, and discusses the reasons for their success. Instead of answering the question ‘what kind of cinema has “the Greek crisis” produced’, this lecture proposes instead to reflect on the complex ways in which narrative world cinema today (and Greek cinema in particular) engages with the contemporary moment, and its political, social and economic challenges.
Papanikolaou proposes to see the Weird Wave as a powerful example of a contemporary “Cinema of Biopolitics”. Balancing between (and often intertwining) modes of allegory and realism, this is a cinema that reflects on the management of groups of people and the bodies of individuals, while being equally sensitive to forms of resistance, noise, unease and subversion. Assessed from this perspective the films of Lanthimos, Tsangari, Tzoumerkas, Economidis, Koutras et al., show more clearly their position in a (bio)politicized culture. Not only when they merge micro-stories of precarity, control and resistance with subtle references to the macro-histories of uneven growth, exploitation, disinvestment, austerity and revolt. But also by turning their focus on the body as a site of discipline, desire and resistance.

Bio speaker
Dimitris Papanikolaou is Associate Professor of Modern Greek at the University of Oxford. He has written the monographs: Singing Poets: Literature and Popular Music in France and Greece (Legenda, 2007),“Those people made like me”: C.P.Cavafy and the poetics of sexuality (Patakis, 2014, in Greek) and There is something about the family: Nation, desire and kinship in a time of crisis (Patakis, 2018, in Greek). His editorial work includes the special issues of the Journal of Modern Greek Media and Culture on Cavafy Pop (2015) and New Queer Greece (2018), as well as the new edition of the collected works of author Costas Taktsis in Greek. He is currently writing Greek Weird Wave: A Cinema of  Biopolitics for Edinburgh University Press.