Home Nieuws Archief 16 January 2020: Lecture: The Art and Architecture of Crete between Venice and Byzantium

16 January 2020: Lecture: The Art and Architecture of Crete between Venice and Byzantium 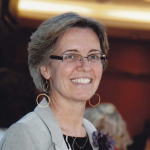 Abstract
This talk examines the art and architecture produced on the island of Venetian Crete as a window into broader Mediterranean cultural encounters. The rich archival material from Venetian Crete offers glimpses into a world of ethnically mixed families, bilingual linguistic borrowings, religious clashes, and cultural compromises under the umbrella of a well-defined but somewhat malleable Venetian administration over a colonial territory. My paper explores a few specific cases that showcase the ways in which imported artistic forms and practices were fused with local elements as signs of allegiance with the ruling elite, as ways to climb the social ladder or capture the needs of foreign patrons or as illustrations of following local fashion. Probing the intentions of patrons, users or artists the query becomes wedded to local concerns that enrich the global Mediterranean perspective.

Maria Georgopoulou was trained as an art historian and her scholarly work explores the artistic and cultural interactions of Mediterranean peoples in the Middle Ages. She holds a Ph.D. in Art History from the University of California, Los Angeles, and taught at Yale University (1992-2004) where she also founded the Program for Hellenic Studies. She is currently the Director of the Gennadius Library at the American School of Classical Studies in Athens. During her tenure, the Gennadius Library has expanded its academic offerings and developed new outreach programs including exhibitions to attract and educate an ever wider audience.