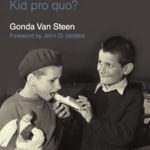 Due to the international coronavirus crisis this lecture is postponed. It will be offered online during the academic year 2020-2021.

Guest speaker: Prof. Dr. Gonda van Steen, Koraes Chair of Modern Greek and Byzantine History, Language and Literature in KCL’s Centre for Hellenic Studies and Department of Classics
Title: Adoption, Memory, and Cold War Greece
Time: 4.30 p.m.
Location: Doelenzaal, UB, Singel 425, Amsterdam
Language: English
Abstract
In this talk, Gonda van Steen will present her new book, Adoption, Memory, and Cold War Greece. This book presents a committed quest to unravel and document the postwar adoption networks that placed more than 3,000 Greek children in the United States, in a movement accelerated by the aftermath of the Greek Civil War and by the new conditions of the global Cold War. Greek-to-American adoptions and, regrettably, also their transactions and transgressions, provided the blueprint for the first large-scale international adoptions, well before these became a mass phenomenon typically associated with Asian children. The story of these Greek postwar and Cold War adoptions, whose procedures ranged from legal to highly irregular, has never been told or analyzed before. Adoption, Memory, and Cold War Greece answers the important questions: How did these adoptions from Greece happen? Was there any money involved? Humanitarian rescue or kid pro quo? Or both? With sympathy and perseverance, Gonda Van Steen has filled a decades-long gap in our understanding, and provided essential information to the hundreds of adoptees and their descendants whose lives are still affected today.

Bio speaker
Gonda Van Steen earned a BA and MA degree in Classics in Belgium and a PhD degree in Classics and Hellenic Studies from Princeton University. Her research and teaching interests include Greek language and literature through Byzantine and Modern Greek, Western travellers to Greece and the Ottoman Empire, nineteenth and twentieth-century receptions of the classics and especially of ancient theatre, and modern Greek intellectual and social history. Van Steen holds the position of Koraes Chair of Modern Greek and Byzantine History, Language and Literature in KCL’s Centre for Hellenic Studies and Department of Classics. Formerly, as the Cassas Chair in Greek Studies at the University of Florida, she taught courses in ancient and modern Greek language and literature and served as president and subsequently as executive director of the Modern Greek Studies Association (MGSA, www.mgsa.org). Van Steen is the author of four books: Venom in Verse: Aristophanes in Modern Greece (2000); Liberating Hellenism from the Ottoman Empire (2010); Theatre of the Condemned: Classical Tragedy on Greek Prison Islands (2011); and Stage of Emergency: Theater and Public Performance under the Greek Military Dictatorship of 1967-1974 (2015). Her new book, Adoption, Memory, and Cold War Greece: Kid pro quo, has taken her into the new, uncharted terrain of Greek adoption stories that become paradigmatic of Cold War politics and history.