8 December 2021: Lecture: The visual language of anticommunism in post-war Greece 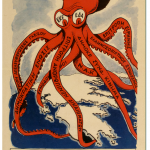 Abstract
This talk examines how visual media was used in Greece after the Civil War of 1944-49 to construct a regime of anticommunist fear. It focuses on the sizeable volume of propaganda imagery produced by the victors of the Civil War from the late 1940s to the fall of the Military Dictatorship in 1974, including posters, illustrations, book covers, photographs, stamps, and movies to demonize the left and spread mass terror around it.  It argues that this anticommunist imagery patterned itself on older themes of negative othering embedded in Greek popular culture, using medieval and early modern tales of lycanthropy, Orientalism, Islamophobia, chauvinism, and gynophobia. Communists were depicted as monsters, beasts, barbarians, Muslims, Turks, Jews, unfeminine women and, sometimes, as Satan personified. Although anticommunism posited itself as an ideology and an intellectual critique, an analysis of its iconography suggests that it was essentially a power discourse of social stigmatization.

Bio
Alexander Kazamias is a Laskaridis Visiting Research Fellow at the University of Amsterdam and Senior Lecturer in Politics at Coventry University. He is the author of Greece and the Cold War: Diplomacy, Rivalry and Anti-Colonialism after the Civil Conflict. He has written extensively on modern Greek history, culture and politics, Greek-Turkish relations, and the history and politics of Egypt. Previously, he has been Visiting Research Fellow at the Universities of Princeton and Edinburgh. He has given interviews and contributed press articles to many media outlets, including the TLS, the Guardian, the BBC, Russia Today, Kathimerini, EfSyn, and Al-Ahram Weekly.  His current research at Amsterdam focuses on the cultural politics of anticommunism in Greece during the Cold War.