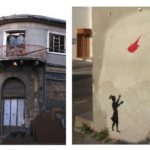 Guest speaker: dr. Pafsanias Karathanasis, Social Anthropology, PhD
Laskarides Visiting Research Fellow in Modern Greek Studies 2019, UvA
Title: Writing in a city in-crisis: Stencil graffiti in the Old Town of Nicosia
Time: 3.30 p.m.
Location: Doelenzaal, UB, Singel 425, Amsterdam
Language: English
Abstract
Τhe Old Town of Nicosia, the historic centre of the Cypriot capital that is surrounded by sixteenth-century circular Venetian walls, presents an urban landscape that is marked by the material remains of division; a landscape in prolonged crisis. The Cypriot Green Line, the United Nations controlled Buffer Zone that divides the island, passes right through the middle of the Old Town serving as a constant reminder of war and partition. After more than forty years of negotiations no progress has been made towards a solution to the Cypriot Issue. Despite the fact that the Republic of Cyprus managed to recover economically, one can argue that the 1974 crisis never actually ended. On both sides of the island, the 1974 crisis-event gradually gave way to an everyday socio-political crisis, turning it into a normalized crisis that was embedded within the fabric of daily life. Thus, the more recent ‘financial crisis’ of 2013 emerged in a socio-political context dominated by an already existing crisis.

This presentation will be an ethnographically informed semiotic and spatial analysis of political street art pieces, or, in other words, a cultural reading of self-authorized political interventions collected from the walls of the Old Town of Nicosia during the 2011-2015 period, before and during the Cypriot ‘financial crisis’. I consider some examples of self-authorized stencils, which are a specific iconic style of street art. In my discussion, I address the ways in which these pieces represent and visualize ideas and attitudes towards Cyprus’ socio-political reality, in relation with the spatiality and the locality of the Old Town, where they are placed. To do so, I built on ethnographic fieldwork, interviews and participant observation conducted between 2009 and 2015. In most cases, these stencil graffiti pieces contest the dominant narratives (of the division, of ‘crisis’ and of urban development) put forward by the city authorities and political elites.
Bio
Pafsanias Karathanasis is a social anthropologist. He holds a BA in social anthropology from Panteion University in Athens, an MA in Material and Visual Culture from University College London, and a PhD in historical and social anthropology from the University of the Aegean in Greece. His research interests include anthropology of space and place, visual culture and political anthropology, while he is specifically interested in urban cultures, grassroots initiatives, and contested landscapes in cities. He has done research on urban practices such as street art and political activism, and he has worked with political and artistic grassroots initiatives in Athens and Nicosia. Since 2016 he has been collaborating as a researcher with the Fast Forward Festival, an Art festival organized by the Onassis’ Cultural Center in Athens, and since 2017 he is the scientific advisor of the Athens Ethnographic Film Festival-Ethnofest.