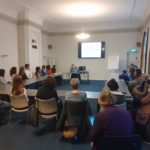 The ΚΕΓ-Certificate Award 2019 will take place after the lecture in the same room.

Abstract
During the Modern Greek Enlightenment and particularly in the 18th century a number of Greeks either lived in Holland or studied and translated books by distinguished Dutch intellectuals and scientists. This lecture exposes the related views of Ioannis Sakellarios, Antonios Katiforos, Evgenios Voulgaris, Ioannis Pringos, Patriarch Kallinikos III of Constantinople, Nikolaos Zerzoulis, Bishop Amvrosios of Trikala, Athanassios Psalidas, Adamantios Korais and Stephanos Dimitriadis. The Dutch authors, who were particularly known to these Greeks, were Christiaan Huygens, Bernard Nieuwentyt, Hermann Boerhaave, Willem Jacob ’s Gravesande and Petrus van Musschenbroek. At the same time many books published in Holland were available in Greek public and private libraries.

Bio
Dr Elias Tempelis studied Greek Philosophy at the Universities of Athens and London. His PhD dissertation was about the theory of the school of Ammonius, son of Hermias, on knowledge of the divine. Currently he is Professor of Philosophy at the Hellenic Naval Academy and tutor at the Hellenic Open University. As a historian of philosophy he is particularly interested in Late Antiquity and Modern Greek Enlightenment.